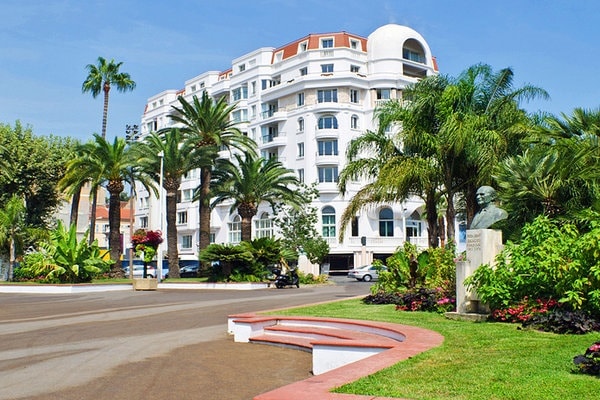 One of the most fashionable streets on the French Riviera, this elegant palm-lined boulevard is the center of tourist activity in Cannes. The Boulevard de la Croisette is lined by elegant Belle Epoque hotels, such as the historic InterContinental Carlton Cannes-a wonderful example of grand French Art Nouveau architecture designed by Charles Dalmas. Visitors will also be awestruck by the beautiful villas and upscale boutiques. The boulevard extends from the new Palais des Festivals along the rade de Cannes with its splendid sandy beach.

A beachfront promenade offers splendid people-watching as well as magnificent views of the gulf and the Lérins Islands in the distance of the Mediterranean Sea. The Boulevard de la Croisette ends at a yacht harbor, where the pirate ship Neptune is docked. This impressive ship was built as the backdrop for an adventure film. At the eastern section of the boulevard is the lovely Parc de la Roseraie and the idyllic Port Pierre Canto with its rows of luxury yachts docked at the harbor. Also within walking distance is another harbor, the Port de la Pointe Croisette, the departure point for regattas organized by the Yacht Club of Cannes. Water sport enthusiasts will want to continue towards the nearby Port Palm Beach where there is a sailing school.